First Laureate of the New “Art of Air Award” is Dr. Jibin Chi

Hennef, December 21st 2018 — There are already plenty in the calendar: “Open Monument Day”, “Mountain Day”, or even “Friendship Day”. Also known as remembrance or campaign days, they have led to many more or less spectacular events, objects, or behaviours. On its own, the UNO has called for more than 70 “World Days”, each dedicated to a special event or occasion. It’s a little surprising therefore, that there is an “Aerospace Day” but not an “Air Day”; not a single day to remind us of our greatest asset.

After all, air or more accurately the breathing atmosphere, can hardly be more appreciated considering it is prerequisite to all life on earth, the source of our very existence. Without food, the human being can survive several weeks; without water, a few days; but without air merely a few minutes. So what could be more important? On average, humans inhale and exhale approximately 12,000 litres of air around 21,000 times per day; that’s close to 7.5 million breaths per year — or more than half a billion throughout their life. Air incessantly nurtures our heart via the lungs which can be compared to the fields we sow and harvest. The better the seed and the nutrients, the better the harvest: our health, our fitness, our well-being, our life. The healthcare organisation Airnergy, located in Hennef, Germany, which concentrates on the (re-)vitalisation of the ambient respiratory air, has responded to the situation and declared December 21st the day of commemoration for our most cherished nutrient: “Air Day”. The relevant web domain has been registered.

But it doesn’t stop there. The “Art of Air” initiative, also founded by Airnergy, has established the “Art of Air Award” (AoAA) which is presented to individuals, groups, or institutions on this day as recognition for research and discoveries which are highly relevant to our lives.

The “Art of Air Award” has just been awarded for the first time to Dr. Jibin Chi, President of the Channel Biomedical Group and Director of the CHI Awakening Academy, in the category “Science”. Dr. Chi (transl.: Dr. Energy) works worldwide in the fields of holistic and natural medicine, with innovative healthcare technologies and therapies. Not only in Asia has the renowned scientist in recent years measured and evaluated Heart Rate Variability (HRV) using the innovative Alpha 1 value (providing insight into the regulatory circuits in our bodies); in so doing, he has had positive experiences with Airnergy. The respected researcher, who lives in Sweden, lectures worldwide on the immense benefits of Spirovitalisation.

Dr. Chi: “Make everyone aware of the benefits Spirovitalisation can provide”

On the occasion of his distinction at the Steigenberger Grandhotel Petersberg in Königswinter, Germany, he said: “I am proud and happy to receive this award. One of my biggest objectives is to make everyone aware of the benefits Spirovitalisation can provide. My own experiences with this therapy are the reason why I became more deeply involved with physiology, energy medicine and quantum biology. The Airnergy technology perfectly assimilates the theories of two great Nobel laureates, Otto Warburg and Dr. Albert Szent-Györgyi. This is why we have experienced so many unheard-of-miracles with Airnergy that traditional medicine cannot understand or explain. Airnergy has really changed the air we breathe shining the light of vivacity on people’s lives!”

Guido Bierther, initiator behind the “Art of Air Award”, was excited by the nomination of this high-ranking award-winner: “One of our most important goals is to grow awareness amongst the general public for the nutrient behind life and healing: the Breathing Atmosphere”. We are grateful for Dr. Chi’s courageous research which proves we are on the right track with our own groundwork, technology, and quality. A success which wouldn’t have been possible without our customers and colleagues, and for which we are sincerely grateful.”

Dr. Chi began his research on the importance of the proportion of water in the respiratory atmosphere not only through those of the two Noble prize winners. He was also inspired by the countless reports and documentations gathered from a wide number of users which were collected and prepared from the outset by the manufacturer of the Vitalisers. Thereafter, they were the basis of research conducted by Dr. med. Klaus Jung, former Professor of Sports Medicine at the Johannes Gutenberg University in Mainz, Germany, and former member of the Airnergy Scientific Medical Advisory Board, and Dipl. Ing & Dipl. Phys. Karl-Heinz Röber, Professor of Information and Energy Medicine at the Lujianzui International United University in Shanghai, China, and also member of the Airnergy advisory board.

The secret behind the health enhancing effects of forest air

Röber most recently proved the importance of humidity in the respiratory atmosphere and revealed his groundbreaking findings in a 40-page booklet (“The little Atmos” — free download on www.airnergy.de). In this first edition, the down-to-earth scientist also discusses increased pollution of the air and how the naturally present atmospheric water is losing its vitality as a result of binding with particulate matter and toxins, as well as how environmental destruction is negatively impacting the vitality and percentage of relative humidity. The consequence, according to the author, is impaired human health, effecting the lungs and energetic systems. Using Airnergy Vitalisers can help: they are based upon processes found in nature and their energetic impact on our metabolism is more than 2,000 times more efficient than the liquid form of water. According to Röber, this is where the secret behind the health enhancing effects of forest air therapy lies — and which Airnergy replicates. These effects can remain active for between three to five days to protect us against negative environmental influences because our immune system is fully charged and capable of operating more efficiently.

In addition to researchers Röber, Chi and other members of the Airnergy Scientific Medical Advisory Board, Dr. Alberto Duque, who has earned international acclaim reaching far beyond the borders of Columbia where he is a therapist and lecturer, has had positive experience working with Spirovitalisation and the Vitalisers. Duque has had his own practice for more than 30 years and performed and documented more than 18,000 Spirovital applications. He recently expressed in a TV interview, “the Vitalisers work according to a very simple natural principle which has existed since forever: they clean and activate oxygen at the same time. Together with sunlight, the relative humidity in the air, and a naturally based photosynthetic method, they turn the ambient respiratory atmosphere into a permanently active energetic state. This primal energy, which is equivalent to that found in a forest, can now be administered almost anywhere thanks to Airnergy.”

The “Art of Air” initiative plans to award the prize in 21 different categories including Optics, Physics, Philosophy, Music, Photography, Sustainability, Media, Arts, Aerospace, Sensory Sciences and, last but not least, Sports (e.g. aerial acrobatics, gliding, and other sport disciplines).
Discussions are currently in progress with a number of cooperation partners and organisers concerning the awards next year. It is expected that the “Art of Air” initiative will include all 21 AoAA categories for the first time in 2021. 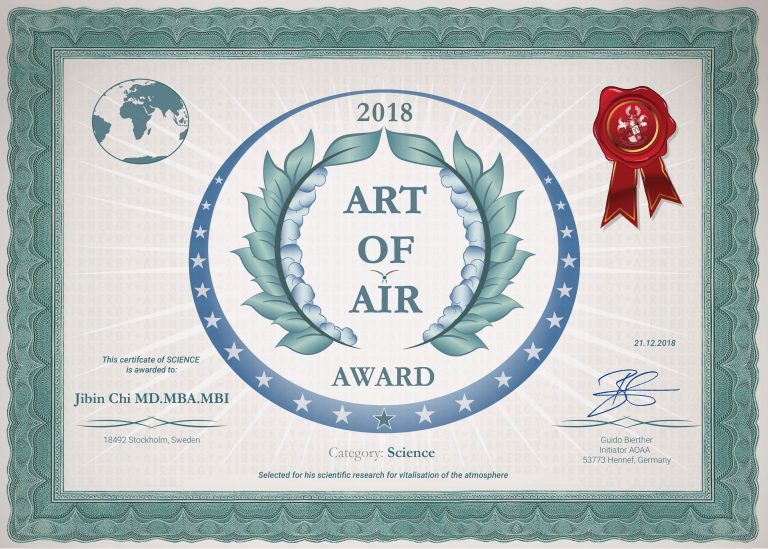