Hennef, December 21, 2019 – The „Art of Air“ initiative founded by Airnergy has also presented the „Art of Air Award“ (AoAA), which was launched a year ago, to Dr. Jibin Chi, President of the Channel Biomedical Group and Director of the CHI Awakening Academy in 2019. Chi is involved worldwide with holistic medicine, or more precisely, translational medicine, an interdisciplinary branch of biomedicine that brings together the three main pillars of „research, treatment and science“ to promote the further development and improvement of prevention, diagnosis and therapy. Dr. Chi was once again awarded the prize in the „Science“ category for his extraordinary achievements in the field of respiratory medicine.

With this renewed award, the „Art of Air“ jury deliberately honors the outstanding research work of the renowned scientist and sets a clear signal for the perception of his new groundbreaking findings.

This also involves a treatment method that works entirely according to nature’s example. With the help of atmospheric oxygen (21%) in combination with sunlight, the relative humidity of the ambient air and a method based on natural photosynthesis, the so-called Airnergy Vitalizers bring the breathing atmosphere into an active, high-energy state. This allows the human cell to better metabolize this energy and thus convert it into energy and vitality. In particular, performance deficits can be compensated and repair and regeneration processes can be maintained and optimized in a natural way.

On the occasion of his tribute, Chi said: „The fact that I am receiving this valuable award for the second time fills me with special joy. It is very important to me to make the benefits of spirovitalization in the sense of improved oxygen supply known to a broad public – all over the world. The insights I have gained from this treatment method have significantly influenced my research in physiology, energy medicine and quantum biology. In my lectures, I have repeatedly emphasized how strongly the Airnergy technology has brought together the theories of the two Nobel Prize winners Dr. Otto Warburg and Dr. Albert Szent-Györgyi. This makes Airnergy a producer of forest air, so to speak, which enables it to absorb the energy of healthy forest air even in closed rooms, which is also called ‚forest bathing‘. Where can you find something comparable today?

In 2019, the Nobel Prize for Physiology and Medicine was awarded to the US researchers Dr. William Kaelin Jr., Sir Peter Ratcliffe and Dr. Grepp Semenza for their joint investigation and research in the field of cellular oxygen supply and oxygen utilization (med. O² Utilisation).
The award of the current Nobel Prize in Medicine supports and thus once again confirms the importance and effectiveness of spirovital therapy and its holistic effect on cellular life.

Guido Bierther, „Art of Air“ initiator, was particularly pleased about this recognition: „With the award of the current Nobel Prize, our achievements are also indirectly recognized, because the research results of the three prize winners are almost identical to the results of our own work. This means that greater international attention is now also being drawn to our most important foodstuff. After all, one of our most important goals is to create public awareness of our most valuable food and indispensable remedy: the ‚breathing atmosphere‘. Our recently produced educational brochure „Der kleine Atmos“ (The Little Atmos) successfully contributes to this and is also very popular with children. We would like to thank Dr. Chi very much for his extraordinary achievements and his outstanding commitment in the field of oxygen supply and thus spirovitalization. The results of his research work are a lasting confirmation of the success of our basic scientific work, our technology and quality and our products. Dr. Chi’s newly created „White Paper“, which explains the essential details of spirovital therapy, can now be downloaded from Airnergy“.

Chi arrived at his study results not only through the work of the respective Nobel Prize winners. He was also inspired by countless customer feedback, documentation and publications on the application successes of various users, which Airnergy, as the manufacturer of the vitalizers, meticulously collected from the very beginning and conscientiously prepared for scientific and other purposes.

The AoAA is regularly awarded on December 21: the „Day of Air“ or „Day of Air“, which Airnergy initiated last year to draw attention to the high value of our most valuable foodstuff. The importance of air, or more precisely: the atmosphere in which we breathe, can hardly be overestimated for cellular life, since it is the source of all our existence from the first to the last breath. Without food man could survive for a few weeks, without water for a few days, but without the energy from the air for only a few minutes. Every day, man breathes in and out about 12,000 liters of air about 21,000 times, in the year this is about 7.5 million breaths – and thus far more than half a billion in his life. We are often not aware of these enormous quantities.

The still young „Art of Air“ initiative plans to expand the award, which is presented to an individual, a group, a company or an institution, to a total of 21 categories in the coming years. With the Art of Air Award, it thus intends to recognize special merits in the future in the fields of methods, optics, physics, sensor technology, philosophy, music, photography, sustainability, media, art, travel, aviation and sports, including, for example, aerial acrobatics or disciplines such as sports and gliding, all around the topic of „breathing air“. Talks will be held with potential cooperation partners and professional event organizers about the selection and awarding of prizes for the coming years. It is planned that the „Art of Air“ initiative will invite international entries in all 21 AoAA categories for the first time in 2021. 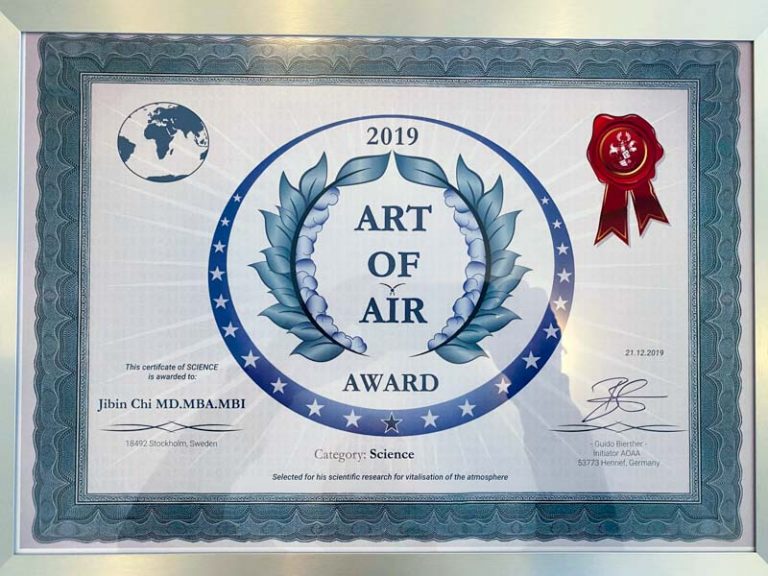